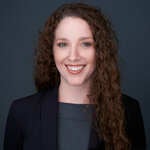 Grace E.J. Fincham is an Associate Attorney at DRD Law, LLC. Grace began her legal career as a Judicial Clerk for the Honorable Regina Scannicchio in the Domestic Relations Division in Cook County Circuit Court for a year before practicing. While she had always excelled in criminal law, it was not always her plan. However, Grace quickly found her place and passion in practicing criminal defense. She continues to be very passionate about helping those who find themselves within the system and couldn't imagine herself practicing in another area. She is known for her large personality and presence, making up for what she lacks in size. “Though she may be small, she is mighty.” Grace has always been the type to fight for what she believes to be right and always roots for the underdog. She is one you know you can trust to have on your side in the courtroom.

Grace is a Nebraska-born native who grew up in a military home, exposing her to a large life during her childhood, ensuring her passion and future in the law early on. Her family later relocated to central Iowa, where she received all her degrees from Des Moines Area Community College and Iowa State University (ISU). During her time at ISU, she was very active in the Government of the Student Body and other organizations. Grace attended law school in Chicago at (formerly known as) The John Marshall Law School, where she received her J.D. She was a teaching assistant, the treasurer for the Student Bar Association, Student Chair on the Academics Affairs Committee, and Fundraising Co-Chair on the Public Interest Law Student Council. She won The Dean Fred Herzog Moot Court Competition and Best Brief, allowing her a seat on the Moot Court Honors Council.

After law school, Grace decided to stay in Chicago, where she lives with her dog, Cricket. Outside the courtroom, she prioritizes time with her dog and her family, enjoying the outdoors, and watching Nebraska Football. She is a member of the Illinois State Bar Association and the Iowa State Bar Association, as well as a long-time member of the Justinian's Society, where she is proud to celebrate her Italian American Heritage within the city of Chicago.

We offer a Free Consultation and we'll gladly discuss your case with you at your convenience. Contact us today to schedule an appointment.